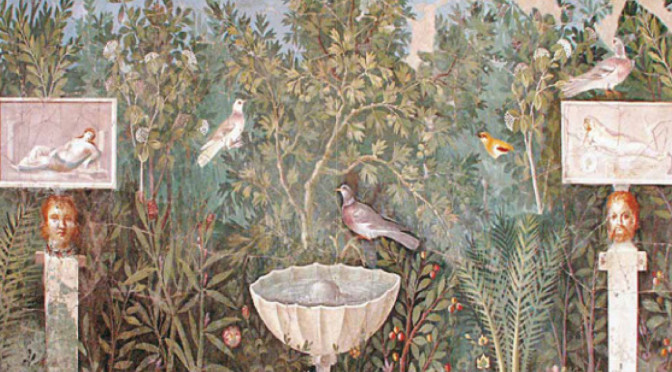 The project, promoted by the Restoring Ancient Stabiae Foundation, intends to educate teachers and students alike about a subject that is rarely explored: sounds and music from the Ancient Mediterranean.
The course of study is very innovative, yet scientific, it deconstructs the understanding of the sources of noise and its effect on the human ear based on the individual, and how that may or may not be different from the ancients.  The course will also discuss the larger belief and cultural system attached to music and sound, and how the all changed and shaped each other.

“Every place in the world has its own specific soundscape. Some places in Italy have kept its ancient atmosphere: the pastoral, largely unchanged since the Romans, Etruscans, and in some cases since prehistoric times.”

ANCIENT LANDSCAPE SOUNDS is a project to help students recognize and understand the uniqueness and peculiarity of certain soundscapes through activities that link the heritage of the ancient sounds to their cultural places of origin.  It will teach us to identify the soundscape of a place and to re-evaluate, and respect the sounds of nature and its silence. We will largely focus on therapeutic sounds, identified for us in the ancient writings of Ovid, Pliny, and Virgil, who described the refreshing scenery, soothing sounds, and the revitalizing, healing silence of birds and crickets in Villa Ozio of Stabiae and Oplontis.  We will then compare this to the street sounds and traffic of Pompeii and Herculaneum.

The Restoring Ancient Stabiae Foundation and Synaulia, the premier group of music and dance of ancient Rome, are working together to create a syllabus to educate visitors on the sights, sounds, and daily lives of those from the Ancient Roman and Mediterranean Culture. It takes into account, not only the music of the time, but also the naturalistic sounds of the landscape, town, and other noises from the time. The Syllabus is in line with the Ministry of Education standards for sound and music.

SYNAULIA the first group of music and dance from the ancient Rome. Founded by Walter Maioli, Nathalie van Ravenstein and Luce Maioli, they have developed researches, in preview, for the rediscovery of the sonorous and musical patrimony of the antiquity, coordinated and reconstructed about dozens of musical instruments, dances, choreographies and recitations. Anticipators of the theme concerts in museums environments and archaeological sites, they have contributed to relaunch the image of the ancient Rome, besides having influenced the cinema and the television productions. SYNAULIA has a warm consent with hundreds of articles on the international press and television passages; the CNN and the principal national TVs in Italy, France, Germany, Holland, Japan.